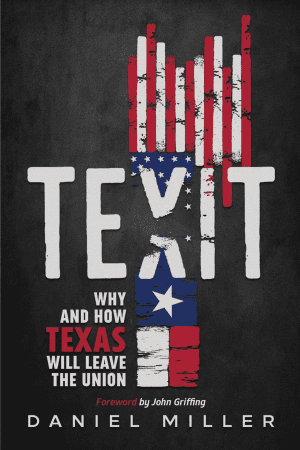 Why And How Texas Will Leave The Union

Texit is the first non-fiction book to delve into the motivations, the process, and the practicality of a modern-day Texas exit from United States.

Channeling his 20 years of experience on the issue, author Daniel Miller, takes the reader through the historical and cultural foundations of Texit, its impact on mainstream politics, and plainly lays out the grievances expressed by many Texans that drive their support for an independent Texas.

Texit also addresses the most common objections with facts and sheds light on what a future Republic of Texas could look like. Foreword by John Griffing.

“Texit is the result when reasoned logic meets the God-given Right of Self-Determination.  Not since Thomas Paine penned Common Sense in 1776 has there been a more eloquent, researched and concise argument for providing citizens with the unencumbered freedom to choose their own destiny.  Miller travels well beyond the conventional arguments about the encroachments into our freedoms by the Federal government and tackles the practical challenges that include the legalities, debt, currency, military, social security and the economics of an independent Texas.  Texit is a must read for all those who believe governments solely derive their power from the absolute consent of the governed.” –  David Thomas Roberts, CEO – Teligistics, Publisher & Author of “A State of Treason“

“As someone with close involvement in Brexit and Grexit, having actively fought and experienced the difficulties of fighting against the establishment and an almighty union, I regard Daniel Miller’s book as a snapshot into the future of the United States.” – George Konstantinidis, UK Independence Party Regional Chairman 2014-2017

“Yes, Texas independence is possible. In fact, the prospect of Texas independence is most probable! Unprecedented in any published work, Texit by Daniel Miller patiently gives the details – step by step – what must be done for the prophecy of President Sam Houston to come to fruition.” - Apostle Claver, CEO of Raging Elephants Radio LLC

“In Texit, Daniel Miller has an uncanny ability to wax eloquent on information and content that would have most floundering for air.   His educational approach to this highly volatile topic, referencing Texas history, noting events and occurrences that most people were never exposed to or have completely forgotten, for their significance back then, and appropriately, for the relevance these dogmas and precepts have right now has to be surprisingly smooth and palatable to all readers–no matter their background.  Whatever argument one can make against Texit, Miller’s “let us reason together” mantra makes such a compelling case that more and more Texans will be considering his work as a textbook to better days ahead.” –  David Carr, Carr Capital CEO and Author

“Unquestionably, the quickest solution to this problem for Texas is to exercise the right of secession, which instantly cuts off altogether the power of the federal government to interfere in Texan affairs. Texas has always retained the right to secede from the Union.” – Lord Christopher Monckton, former adviser to UK Prime Minister Margaret Thatcher, Viscount of Brenchley

Daniel Miller is President of the Texas Nationalist Movement and has been an outspoken advocate for Texas independence since 1996.

other books that you'll love