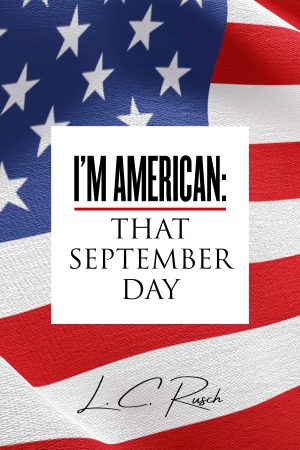 about I’m American: That September Day

Experience the destruction of 9/11 through the eyes of Tyrell, a young man on his second day of high school only a block and a half from the World Trade Center. Tyrell’s worry for his dad, a New York firefighter, takes precedence as he witnesses firsthand the largest terrorist attack in American History.

The I’m American series gives middle aged readers a chance to see life through the eyes of previously unheard from Americans. Follow their stories through different ages and scenarios as they form the tapestry of our nation.

References following each story allow for readers to dig deeper into the history that inspires the characters and the narrative.

L.C. Rusch has spent the majority of her life fascinated with the complexity of history. Encouraged by her grandfather, history quickly became her favorite subject in school. Being homeschooled allowed her the chance to explore this interest more freely than any public or private school education could grant. Visits to historical sites, and interactive history all played a part in building the foundation for her passion for historical research. From the American Civil War to medieval Britain, history has enthralled her for decades. It is the reason she studied history in college and where she obtained an undergraduate degree in History. In college, she first began to notice the disparity between her homeschool education and that of her classmates, particularly when it came to history. A massive gap has been created in public schools where history is taught to be something boring and dismissible. She decided it was time to rectify the issue. And so, the I’m American book series was born. The intent of the series is to resurrect interest in history with a younger generation. L.C. hopes that a rebirth of interest in history, not just American, will give the next wave of youth the chance to more fully understand the past and be better prepared for the future. To this day, she remains close to home with her family whose invaluable support and encouragement made the I’m American series a reality. She hopes to continue to expand her series to include protagonists representing all types of Americans. Her love for sewing, reading, and writing fills her free time.
Read more