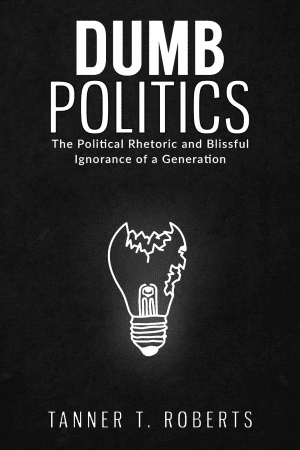 The Political Rhetoric and Blissful Ignorance of a Generation

Moral arguments have taken the place of empirical evidence. Virtue signaling has replaced constructive political discussion. Individualism is dead and efforts of those that govern are measured more meticulously than the efforts of those who are governed. All of the rhetoric taking place in the political climate today is generationally backed for years to come. What is this rhetoric? It is simply Dumb Politics. Broken ideas and assimilation of thought have rooted itself in education, economics, culture, immigration, and political name calling. Dumb Politics will teach us that you must never underestimate the ignorance of the masses.

“Dumb Politics deals with the politics of emotion and virtue signaling. This book demonstrates that we need politics based on sound thinking and good results that work for everyone. Read it!” – (Dinesh D’Souza Dinesh D’Souza – Author/Filmaker)

“Economics drives most of the personal & political decisions we make as Americans.  When the economy stinks, our elected leaders get the blame and when it’s sunny, they take the credit.  Tanner Roberts takes economics and shows how it powers the decisions that change the world we live in every day. “Dumb Politics” is a must read for everyone who wonders why so many things are now decided on someone’s feelings rather than cold, objective facts.” – (Lars Larson Lars Larson, Host of the nationally-syndicated radio talk show “The Lars Larson Show”)

“Finally! Someone has written a book that aptly – and hysterically – describes the destructive, imbecilic obsessions of boobus americanus and his elite, political and media masters. Masters who fancy themselves geniuses when in reality, they’re only genius if they’re in the cast of Idiocracy. Tanner Roberts is hauntingly accurate in his descriptions of how dumb our civic religion has become. Its a smart book that indicts our dumb rulers with a new principle of non-contradiction: something cannot be dumb and smart at the same time and ‘Muricah’s politics, culture etc. are most decidedly, dumb.” – (Mike Church Mike Church, host of The CRUSADE Channel’s Mike Church Show)

Born in Houston, Texas, Tanner Thomas Roberts has always had a passion for learning, reading and politics.
Read more